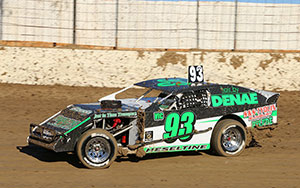 Over the weekend, Dean Heseltine certainly had plenty of reason to celebrate at Mildura’s Timmis Speedway when he managed to break through to win his maiden state title victory in the South Australian AMCA Nationals Title, while also taking out the overall All Stars Series win.

Having always shown strong pace during state title events, with his best previous result being a fifth-place finish in a Victorian Title, Heseltine had not yet been able to clinch the top spot; however, that all changed when everything came together for him on Friday night on a track that he described as both fast and rough. 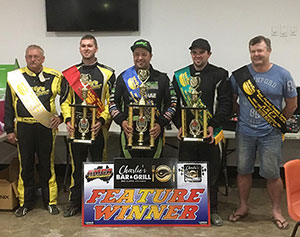 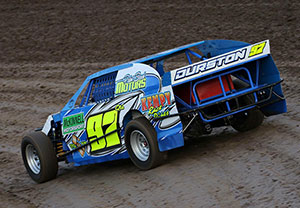 After a 12-month stint on the sidelines, AMCA Nationals racer Nathan Durston found himself back in the winner’s circle at Brisbane’s Archerfield Speedway last Saturday night, breaking through to claim his first feature-race win since returning to the track.

While he’s visited the podium on several occasions throughout the 2017-18 season in the minor positions, Durston hadn’t quite been able to reach the top step while attempting to dial in his 350 Chev powered Qld # 97 Palm Beach Motors / McKinnell Motorsports supported Kempy car; however, last Saturday night’s outing proved that his car is now well and truly capable of winning. 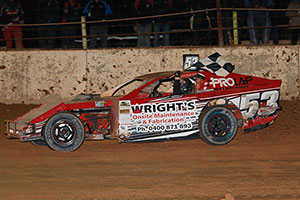 After a dream run at Manjimup Speedway earlier in the season which saw him dominate his three heat races and the feature race, L’Huillier’s confidence was high heading into the WA Title. 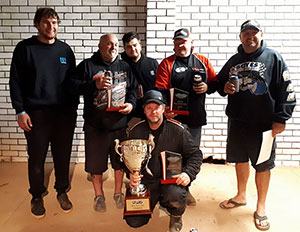 The running of the 2017-18 season Western Australian AMCA Nationals Title was fought out at Manjimup Speedway last Saturday night, and it was Matt L’Huillier who emerged triumphant.

A small field contested the event around the massive 600-metre track and although down on numbers, the field had plenty of quality including: last season’s WA Title runner-up L’Huillier and two-time WA Champion David Boyes. With rain falling on the morning of the event, drivers were met with a tricky track that had plenty of drive in it all through the night. 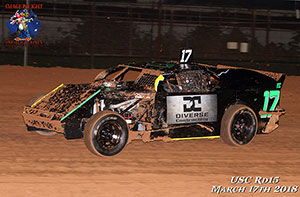 Following an eight-year stint on the sidelines to focus on his family, Shannon Singleton has recently made a return to the driver’s seat in the AMCA Nationals class, experiencing an encouraging season debut.

Having not even visited the speedway in over half a decade due to his demanding business commitments, Singleton decided to make his way back on to the speedway scene during the 2017-18 season, recently purchased the 350 Chev powered Vic # 17 Redline chassis with a quick change differential from Victorian driver Jamie Mills. 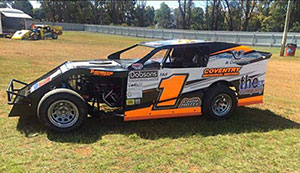 Continuing his Tasmanian AMCA National Title reign, Daniel Brooks made it a remarkable four wins on the trot in last Saturday night’s running of the event at Cranes Combined Carrick Speedway.

The event, which was initially washed out on its original date last month, attracted a field of 19 cars and just like last season’s event, Brooks, from Bothwell in Tasmania, started from pole position and then led all 30-laps. The race was run at a frantic pace as the final 23-laps ran non-stop after an early caution on lap seven. 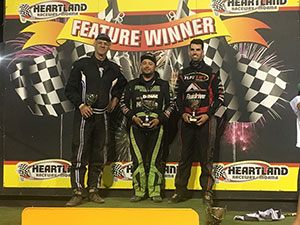 After getting his 2017-18 season off to the best possible start back in October, Dean Heseltine recently at Moama’s Heartland Raceway returned to victory lane after taking out the third AMCA Nationals Action Series round.

Despite not quite achieving the same results as last season, which saw him collect six feature-race wins, Heseltine has enjoyed a positive 2017-18 season so far in his six appearances, having shown solid pace aboard his Vic # 93 Hair By Denae-backed Panther car which he believes has led to improved driving.