Tim Reidy took an emphatic feature-race win at Redline Raceway on Saturday night, in what was the first round of the 2016-17 AMCA Nationals Barry Reidy Memorial Series.

Reidy, based in Darwin, flew in and claimed the win in the event, named in honour of his grandfather, after starting down in 12th place on the grid. Second home was the in-form Dean Heseltine, who put in a strong performance to chalk up another feature-race pole position and his fourth feature-race podium finish in a row. Heseltine led the way for much of the feature race before Reidy, who made quick work of moving through the field, executed his move for the lead. 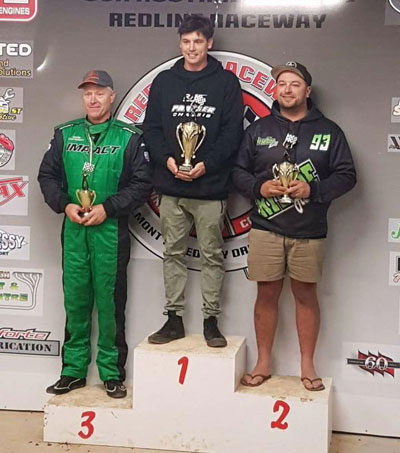 Reidy wasn’t the only driver on the move. Mathew Mills, who started alongside Reidy in 11th place, charged his way through the field, ultimately falling one spot short of a podium place, with NSW driver Shane Cartwright claiming the final place on the rostrum after an impressive showing, while Grant Cullinger won the hard charger award for the night, making up 15 places in his #V77 entry to finish in fifth place, after starting from 20th on the grid.

The Victorian AMCA Nationals will next head to Blue Ribbon Raceway in Horsham on Tuesday, December 27 for the fourth round of the Country Cup.