In what was a race of attrition, which saw numerous restarts, it was Jamie Collins who managed to outlast his rivals to take top honours in last Saturday night’s Victorian AMCA Nationals Title at Ballarat’s Redline Raceway.

As the highest point scorer for the night, the Geelong-based racer started the 30-lap feature race from pole position alongside Tony Blanch (NSW). Despite his best efforts, Blanch was unable to make a move on the race leader, with Collins going flag-to-flag in what was a somewhat disjointed race to claim the Victorian Title crown.

Blanch was also unchallenged throughout the 30-lap distance, retaining the runner-up spot, while an impressive Grant Cullinger delivered the race of his career, charging through the field from position 14 to snare the position from current Australian Champion Matt Hardy on the final lap. After running third for almost the entire race, Hardy was disappointed to finish in fourth, while Australia # 2 Tim Reidy rounded out the top-five finishers.

Dean Heseltine, who was one of the state’s form drivers heading into the event, came home in sixth, ahead of outgoing Victorian Champion Steve Potts (Qld), Jamie Mills, Matt Mills and Russ Hardy (Qld) and ex-Victorian Champion Darren ‘Plugger’ McCarthy in 10th. Shane Cartwright (NSW) and Sharon Tindal were the remaining finishers. 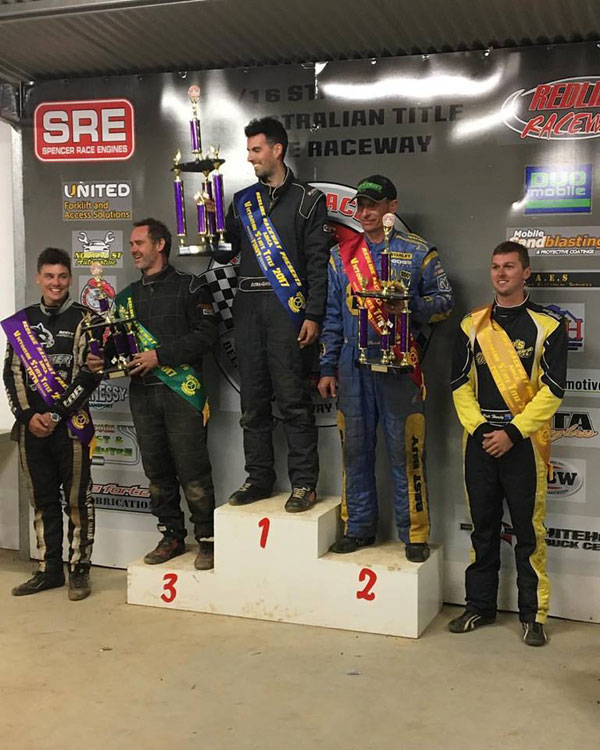 A number of DNFs resulted in a crowded infield, with Jason Robinson, Keenan Casey, Allan Cullinger, Frank Thierry, Kevin Peachey, Bill Lodwick and David Wick all suffering retirements due to a myriad of issues.

McCarthy managed to secure the first transfer spot into the feature race by virtue of winning the B main, with Cartwright, Lodwick and Wick claiming the final transfer spots. Tasmanian visitor Garth Stevens was the only casualty with an unfortunate DNF.