For Jamie Collins, he has achieved quite a lot over his seven seasons of AMCA Nationals racing, but in last Saturday night’s Victorian Title at Ballarat’s Redline Raceway, he achieved a new career highlight by winning his second Victorian Title crown. 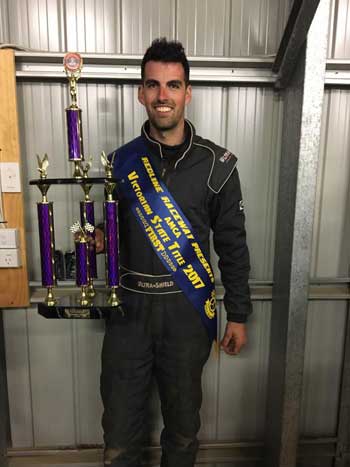 In what had been an up-and-down start to the 2016-17 season, Collins, who has in the past won Victorian, South Australian, Tasmanian and Northern Territory Titles along with placing second in an Australian Title during his seven seasons in the class, was in top form throughout the Victorian Title and was rewarded with the feature-race victory honours.

Up against one of the toughest Victorian Title fields ever assembled, Collins was on top of his game from the get-go, after he had charged from the rear of the field in his opening heat race and came home in an impressive second. In the remaining two heat races, he picked up a win and then a fourth. The latter race saw him once again have to come from the back of the field.

By virtue of his solid heat-race performances, Collins started the Victorian Title deciding feature race from pole position. On a challenging narrow race-line track, along with being surrounded by a big pack of the country’s best AMCA National drivers, Collins powered to the lead immediately from the drop of the green flag. For the entire 30-lap distance, he was able to survive numerous stoppages and also pressure from second placed Tony Blanch, and managed to come away a winner and reclaim the event he had won for the first time back in 2013.

“Our team wasn’t enjoying the best of form leading into the Victorian Title, but our season has certainly turned around following this Victorian Title win,” expressed Collins, whose earlier problems in the season was recently traced back to a driveline issue aboard the Vic # 34 Tuff Lift / AAA Above Plumbing-backed Panther car.

“This season’s Victorian Title field was like an Australian Title field, and there were over 10 potential winners, so you had to be on top of your game from the opening heat race through to the feature race. I had a great run in my tough heat races and earned the right to start the feature race from pole position and I was also provided a great car setup from my crew chief (dad), and they were two of the keys to my win.”

Apart from reclaiming the Victorian Title, Collins was able to bury the demons of last season’s event at Mildura’s Timmis Speedway, where he had qualified second for the Victorian Title feature race only to be sidelined without a lap completed, due to suffering a flat tyre.

The next major event for Collins will be the NSW Title at Gilgandra Speedway on the Saturday night of February 18.

Collins would like to thank his 2016-17 season sponsors: Tuff Lift, AAA Above Plumbing, Fluid Drive, Panther Race Cars, Geelong Carbys, and Johnny Dyno Engines. Special thanks: Phil (dad) and Alana (wife), along with the rest of my family and friends. 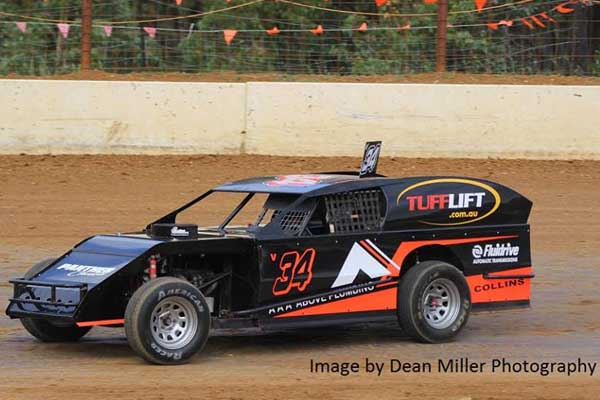