Daniel Brooks achieved a remarkable feat at Carrick Speedway last Saturday night, when he drove to victory in the Tasmanian AMCA Nationals Title, presented by Lotus Admin Services in support of the Cure Brain Cancer Foundation, for the third season running.

With almost 20 Tasmanian drivers nominated, the current NSW Champion dominated the 30-lap Tasmanian Title-deciding feature race, cruising to a convincing victory after getting off to a great start from pole position and maintaining a solid lead from start to finish.

Following Brooks home in second place on the podium was Andrew Ryder, who managed to work his way into the runner-up spot by lap 12 after starting fifth, while Adrian Bassett regained his third-place starting position from Shane Ashlin in the closing stages of the feature race to complete the podium. 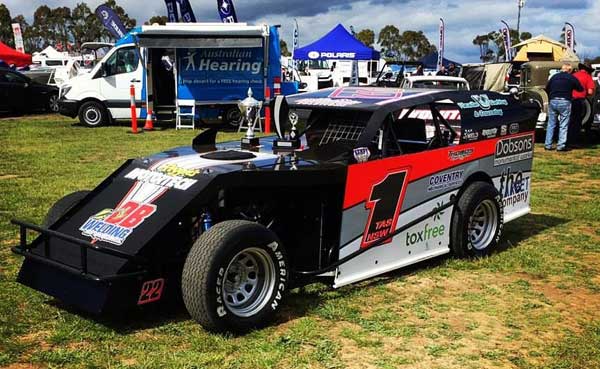 Second-place starter Ashlin came home in fourth, while Rodney Bassett gave an impressive performance, powering through the field from 11th to round out the top-five finishers.

Craig Bagorski, Laura Bassett (who had charged through to seventh from towards the back of the pack), Ray Taylor and Sandor Nagy completed the remaining finishers.

The next state title for AMCA Nationals will take place at Gilgandra Speedway with the running of the NSW Title on the Saturday night of February 18, which will be followed by the Australian Title at Kalgoorlie Speedway in Western Australia on March 3-5.