Twice As Nice for Reidy

With rain threatening to cancel the event, it was Victorian Reidy who managed to master the tricky track conditions in the feature race, coming away with the WA Title crown, off the back of his impressive Australian Champion victory at Kalgoorlie International Speedway the weekend prior. However, it wasn’t all smooth sailing for the Australian Champion.

Despite Reidy lining up in pole position for the WA Title-deciding feature race, it was current and three-time Tasmanian Champion Daniel Brooks who got the best of the start, jumping to an early lead before being forced to retire to the infield with heartbreaking gearbox issues.

Inheriting the lead from Brooks, Reidy kept it together out in front all the way through to the fall of the chequered flag, achieving back-to-back title victories.

Kalgoorlie’s Matt L’Huillier put in a strong showing to finish in the runner-up spot, ahead of outgoing WA Champion David Boyes, who completed the podium in third.

Finishing just off the podium in fourth was South Australia’s Jeremy Moore, with Queenslander Thomas Vickery rounding out the top-five finishers. 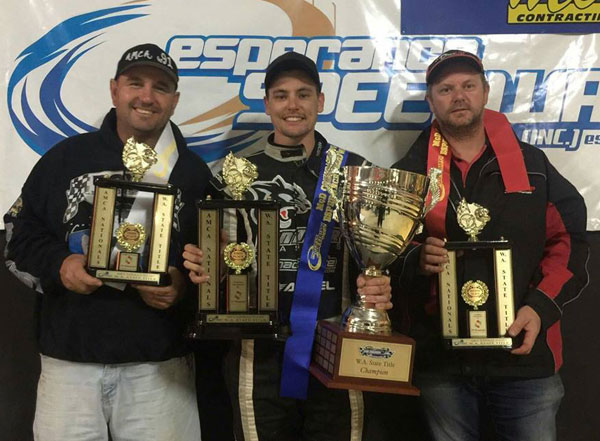 Suffering the same fate as Brooks, Jack Barnewall, Murray Parsons Jnr., Brendan McKeagg, Russ Hardy (Qld) and Rob Wright were all unable to complete the feature race and retreated to the infield.

With no drivers doubling up in their heat races earlier in the night, heat-race wins were shared between Fiorenza, Boyes, Brooks, Barnewall, Parsons Jnr., Russ Hardy, Horan, Brad Wright and Cubbage, with Brooks also claiming a second and third-place finish, while Fiorenza claimed two third-place finishes. Reidy was also a model of consistency, coming away with two second-place finishes and a third.

The next major event for AMCA Nationals will be the South Australian Title at Waikerie’s Sunline Speedway on the Saturday night of April 22, where drivers will no doubt be hoping to put an end to Reidy’s winning form.