Though it’s been a long and turbulent journey towards achieving his long-awaited ambition of winning an Australian AMCA Nationals Championship, it was all made worthwhile last weekend, when Tim Reidy claimed a well-deserved victory at Kalgoorlie International Speedway.

Claiming the chequered flag after a stellar performance in the two-night event, Reidy was filled with an equal wave of joy and relief, with his quest for Australian Championship Glory having certainly not been easy, beginning with his first three attempts in the event from 2009 to 2011 at Mildura’s Timmis Speedway (Vic), Murray Bridge Speedway (SA) and Dubbo’s Morris Park Speedway (NSW) failing to produce his desired results. 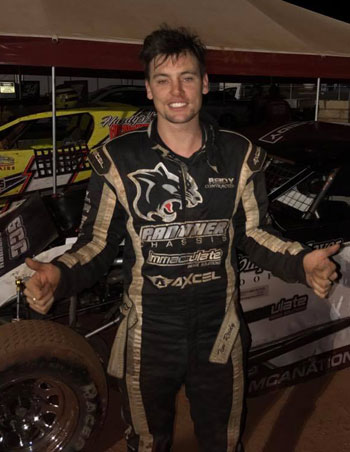 It was during the 2012 Australian Championship at Hamilton’s Western Speedway (Vic) that Reidy began to assert himself as a serious contender, in what was his first season piloting his Panther chassis. Qualifying on the outside of the front row for the feature race, Reidy powered to an early lead before spinning out with four laps to go, dashing his hopes of achieving the victory.

Heading into the 2013 Australian Championship at Brisbane’s Archerfield Speedway (Qld) the following season, looking to make amends off the back of this heartbreaking result, Reidy once again proved his worth, qualifying on pole for the feature race. After dominating proceedings throughout the weekend, nerves eventually got the better of the pilot of the Vic # 79 Panther Race Cars / American Racer supported Panther, with an error in setup hindering his chances of a podium result, slipping back to a fifth-place finish.

Travelling to Tasmania with another season of experience under his belt, Reidy lined up third for the 2014 Australian Championship-deciding feature race at Carrick Speedway in Tasmania, once again managing to claim an early lead, before disaster struck in the form of a flat left-rear tyre, relegating him to the infield. The following season, Reidy finally managed to go one better, this time achieving his first podium result in the 2015 Australian Championship at Murray Bridge Speedway, finishing runner-up to three-time Australian Champion Mark Lincoln.

Last season’s Australian Championship saw Reidy travel to Lismore Speedway (NSW), where he was locked in a fierce battle for the feature-race lead with good mate Matt Hardy and Steve Potts, after he had started from position three. Unable to pip eventual winner Hardy for the lead, Reidy was once again forced to settle for the runner-up spot.

In what was his ninth attempt in the event since joining the class, Reidy began last weekend’s Australian Championship in dominant form from the outset, winning each of his three heat races on the opening night of competition, followed by a fourth-place finish in his remaining heat race on night two, placing him in pole position for the 40-lap Australian Championship-deciding feature race.

Although his nerves were high heading into the feature race, the soon to be 27-year-old racer knew exactly what he needed to do, keeping his head down and focusing on the task at hand. Seizing the lead at the drop of the green flag, Reidy was a man on a mission and could not be stopped once out in front, going on to claim what was an emotional and long-awaited Australian Championship victory, which also proved popular amongst his AMCA Nationals comrades, who were all pleased to see him succeed.

“Finally being able to take out the Australian Championship was an absolute dream come true, not only for myself but for the whole team, who all put in an amazing effort throughout the weekend,” expressed Reidy, who has previously won 10 state titles during his AMCA Nationals career, including four Queensland Titles, three Northern Territory Titles, two NSW Titles and one South Australian Title.

“It was a near perfect weekend for us. We had a slight suspension issue on night two, but we were able to fix it and it all came together for us in the feature race. Even though it’s been a long time coming, I think I’ve matured over the years and I definitely appreciate the win more now than I would have earlier on.

“I have to say a huge thank you to Mick Kiraly from Panther Chassis, who has had a big impact on our success throughout the season and has allowed me to move to the next level as a racer, along with my dad, Mick, and the rest of our amazing crew and sponsors.”

Reidy would like to give special thanks to Mick Kiraly, his dad, Mick Reidy, Wine Racks, Dave, his girlfriend Lucy, Mark Cooper from American Racer Tyres, and all of his fellow AMCA Nationals competitors.

To find out more about Reidy and his team, LIKE them on Facebook by searching Reidy Racing. 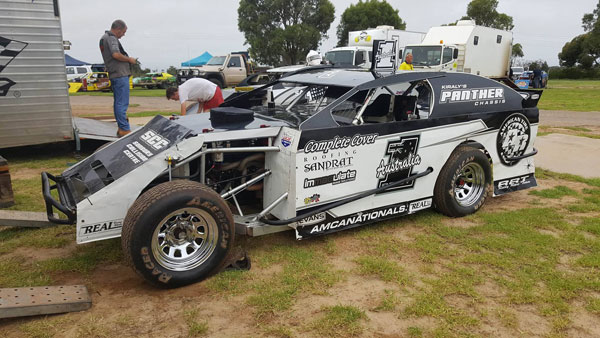