The impressive 2016-17 season continued for Jamie Collins, after he last Saturday night at Waikerie’s Sunline Speedway picked up the second South Australian AMCA National Title win of his career.

Off the back of so far this season taking out the Victorian Title at Ballarat’s Redline Raceway, a runner-up finish in the NSW Title at Gilgandra Speedway, finishing second in the Australian Title at Kalgoorlie International Speedway (WA) and most recently winning the King of the Murray at Mildura’s Timmis Speedway, Collins drove a smart race in tough track conditions to win the South Australian Title. 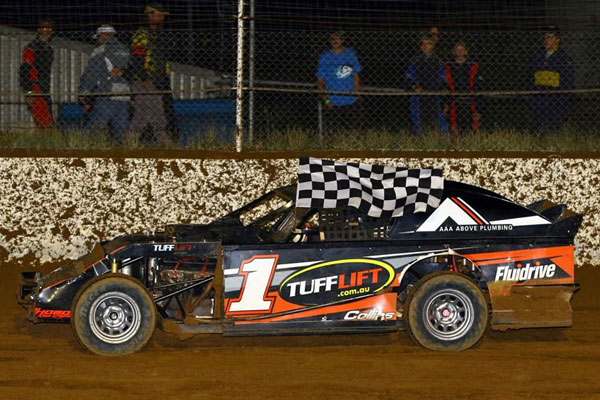 After qualifying third for the South Australian Title-deciding feature race by virtue of finishing his three heat races with a second place and a pair of third-place finishes, the 26-year-old from Geelong in Victoria managed to recover from a tough start and numerous near misses with other competitors as they encountered mechanical issues to move into the lead on lap 12. From there, he was able to steer clear of the rest of the drama and score the win.

“We’re enjoying a great season and adding another major win in the form of the South Australian Title is a tribute to the continued hard work and support of my family and friends,” said Collins, who had a bit of lady luck on his side when his Vic # 34 Tuff Lift / AAA Above Plumbing backed Panther’s differential cover bolts rattled loose during the feature race, due to the tough track conditions.

“Due to the rain leading up to the event, the track was quite challenging, but it was all about driving to the conditions, along with a bit of luck, and it all fell my way and I picked up the win.” 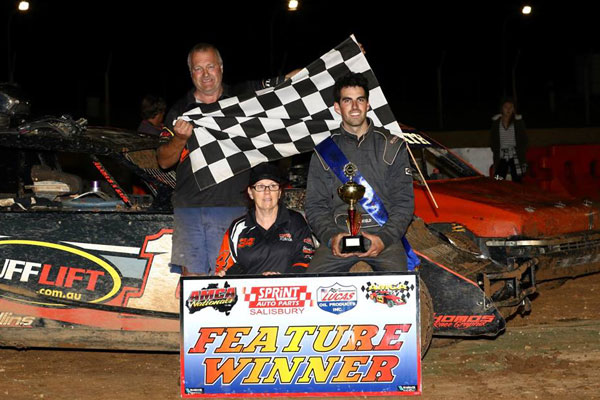 For Collins, this was his second South Australian Title career win – the first being the 2013-14 season running of the event at Murray Bridge Speedway.

The next outing for Collins is set to be on the Sunday of June 11 for the final round of the Country Cup Series at Wahgunyah Speedway.

Collins would like to thank the following 2016-17 season sponsors for their valued support: Tuff Lift, AAA Above Plumbing, Fluid Drive, Panther Race Cars, Geelong Carbys, and Johnny Dyno Engines. He would also like to give special thanks to his dad and crew chief Phil, his wife Alana, Alex, Brendon, his aunty and uncle (Brad and Jenny), and the rest of his family and friends.