Strongly resembling the early stages of the Australian Title feature race just one week prior, where the Victorian duo of Mathew Mills and Jamie Collins, along with Moore (SA), led the field before Moore came away with the victory, the Victorian Title-deciding feature race once again saw the trio heading up the pack; however, on this occasion, Moore didn’t have to wait until mid-race distance to take the lead.

Qualifying on pole position, thanks to a consistent performance throughout his heat races which saw him score two runner-up finishes and a third, Moore was dominant force throughout the feature race, leading each lap of the 30-lap distance and going on to collect his second title crown within the space of just over a week.

Off the back of his Australian Title disappointment, where he greeted the chequered flag towards the rear of the field after qualifying in pole position, defending Victorian Champion Collins did well to keep up the chase of the race leader, but was unable to get close enough to make a move, ultimately being forced to settle for second place.

Proving that his Australian Title qualification result was no fluke, Mathew Mills was once again in solid form and managed to make amends after experiencing a heartbreaking DNF while leading the Australian Title feature race. Starting out of position four, he managed to take advantage of four-time Australian Title holder Shane McKinnell (Qld), who began to slip backwards in the middle stages, making his way into the final podium place. 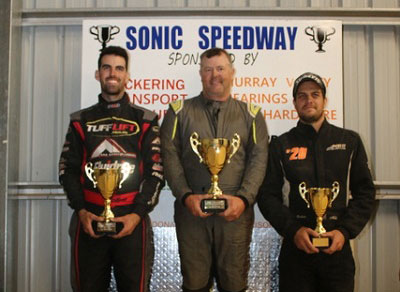 Matt’s dad Russ Hardy (Qld) was the first of the feature-race retirements, with his Victorian Title hopes ending just two laps in, while other premature retirees included Frank Thierry (Vic), Jake Briggs (Tas), current NT Champion Shane Newstead (NSW) and Andrew ‘Dooie’ Ryder (Tas), who completed 28 of the 30 laps before his night was brought to an end.

A challenging night for recently dethroned Australian Champion Tim Reidy saw him unable to qualify directly into the feature race, being forced to participate in the B main which unfortunately resulted in a DNF.

Earning his feature-race transfer spot via a B-main win, Newstead was disappointed to have been unable to finish his Victorian Title Campaign. Fellow B main transferees were Matt Hardy, Allen and Gutierrez.

The next title event for AMCA Nationals is set to take place on the Saturday night of February 24 at Carrick Speedway with the running of this season’s Tasmanian Title. With Brooks having won the last three titles consecutively, he will no doubt be tough to beat; however, numerous challengers certainly won’t make it easy for him.