To say that Jeremy Moore exceeded expectations in last weekend’s Australian AMCA Nationals Title at Ballarat’s Redline Raceway would be a huge understatement, after he clinched the national crown in just his third season with the class.

Having previously travelled to Kalgoorlie International Speedway in Western Australia to contest last season’s Australian Title, where he came away with a pleasing eighth-place result after sustaining damage to his car during his heat races, Moore went into this season’s running of the event with the goal of repeating his top-10 feature-race finish. 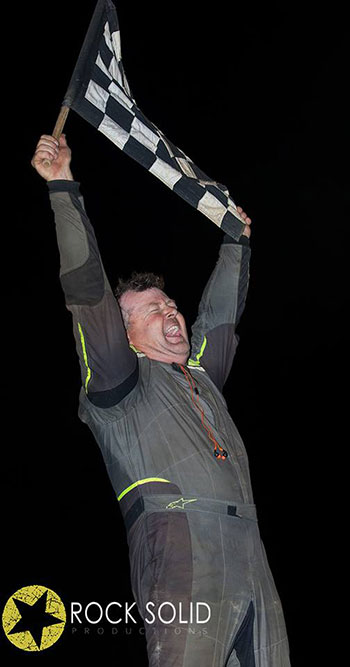 Little did the 47-year-old racer know that his 28th race meeting with the class would deliver him much more than that.

“It still hasn’t fully sunk in that I’ve just won the Australian Title,” admitted Moore, from Kybybolite in the south-east of South Australia, who was feeling slightly more confident heading into qualifying after being second fastest in Thursday’s practice.

“Crossing the finish line in first place and collecting the chequered flag was a very surreal moment for me and I was absolutely exhausted after was a very draining day and night, both physically and mentally.

“Our aim for the event was to qualify for the feature race and hopefully finish inside the top 10, so words can’t express how over the moon I am to have come away with the win, particularly against such a talented and experienced field of drivers.”

With Friday night’s schedule being postponed to Saturday due to inclement weather, Moore was forced to mentally prepare for Saturday, finding it difficult to maintain momentum in the hot and humid conditions, while completing four heat races prior to the feature race.

Winning his opening heat race, Moore’s team struggled slightly with setup throughout the afternoon while still managing to retain their consistency, placing second, fifth and third in his remaining heat races to qualify on the outside of the front row alongside pole-sitter Jamie Collins for the Australian Title-deciding feature race.

With a significant amount of fuel on board to last the 40-lap distance, which made the car somewhat slower, Moore was unable to make the best of his start, quickly slipping back to third on the opening lap where he remained until lap 18 when an incident between race leader Mathew Mills and second-placed Collins left him in prime position to take the lead, with Mills retiring to the infield and Collins being relegated to the rear of the field.

Coming to grips with the tricky track conditions, Moore began to find additional pace aboard his SA # 11 Aqua Steel Industries supported Panther car, which was purchased three years ago from Timmy Reidy. Thankfully encountering no lapped traffic due to multiple stoppages which continued to bunch the field up, Moore couldn’t be stopped, going on to claim what was an exciting Australian Title victory, complete with some donuts on the track after his celebration lap.

Moore will now turn his attention to this Saturday night’s Victorian Title at Swan Hill’s Sonic Speedway, where he will hope to continue his good form.

Moore would like to thank the following 2017-18 season supporters: Aqua Steel Industries, Diversity Signs, GT Racing (Karen and Ross Meek), SE Wheel Alignment, and Naracoorte Pumps & Electrical. Special thanks go to his pit crew: Sonny and Anna DeLegaspi, Steve Letton, Hamish and Claire. Moore would also like to thank Mick and Timmy Reidy and Mick Kiraly for their ongoing support. 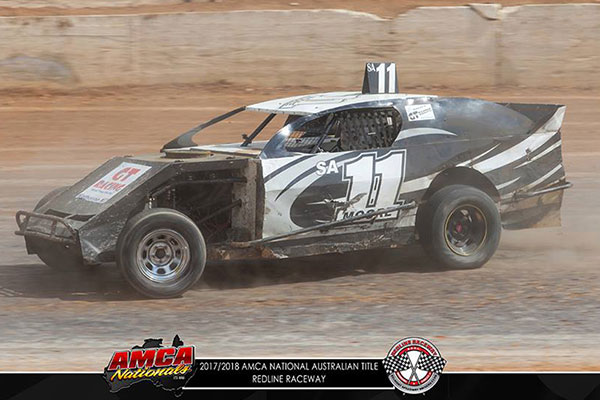