Following an eight-year stint on the sidelines to focus on his family, Shannon Singleton has recently made a return to the driver’s seat in the AMCA Nationals class, experiencing an encouraging season debut.

Having not even visited the speedway in over half a decade due to his demanding business commitments, Singleton decided to make his way back on to the speedway scene during the 2017-18 season, recently purchased the 350 Chev powered Vic # 17 Redline chassis with a quick change differential from Victorian driver Jamie Mills.

Thinking that he would need time to readjust to the sport heading into his season debut at Nowra Speedway, the 40-year-old driver was surprised to find that everything was as familiar to him as it had always been, and he certainly proved that eight years on the sidelines hadn’t taken anything away from his prior competitive form, coming home an impressive third in the feature-race.

“I was surprised how easy it was to step back into the car after such a long time away from the sport; it was basically just like riding a bike,” laughed Singleton, whose last race prior to this season was in 2010, just prior to the birth of his daughter Dakota.

“My daughter was a huge motivator in why I decided to return to racing. She’s always heard stories about me racing and she’s always wanted the chance to come and watch, so it was very special to have her there supporting me.” 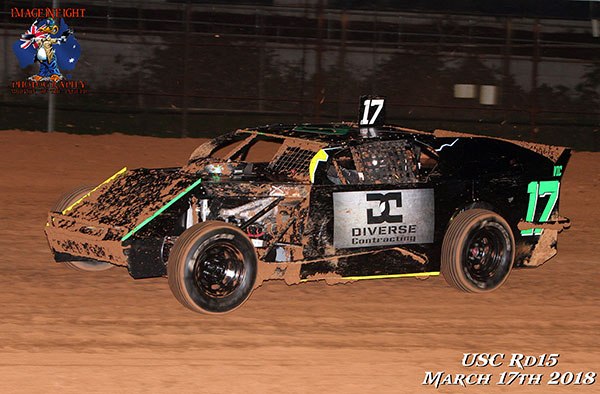 From Pheasants Nest in the Macarthur region of NSW, Singleton previously raced AMCA Nationals in the early 2000s and was a regular front-runner, winning numerous feature races at Valvoline Raceway against some stout competition. Racing for around a decade with the class prior to stepping away, Singleton’s highlights include taking out first place in the 2003-04 season Sydney/Newcastle Club Championship.

Heading to Sydney’s Valvoline Raceway last Saturday night to contest his second hit out for the season, Singleton was once again forced to start rear in each of his races, placing eighth, fifth and 10th in his three heat races, before lining up eighth for the 20-lap feature race. Unfortunately for Singleton, his night ended in disappointing fashion just four laps into the race, when he got tangled up with a half spun car, resulting in a broken right steering arm bolt and a DNF.

Having now completed two meetings, Singleton has qualified to participate in the upcoming NSW Title, which is set to take place at Sydney’s Valvoline Raceway on April 14. Following the NSW Title, Singleton will contest selected shows throughout the remainder of the season, while planning to complete a similar schedule during the 2018-19 season due to work and family commitments.

Singleton is proudly supported in the 2017-18 season by the following sponsors: Diverse Contracting (Nick and Sacha Robbins) and Xtreme Fuel Systems (Nigel and Kathleen Whittaker). Special thanks go to his wife Sarah and their daughter Dakota, Andrew Ash, and Thomas Hazelton.