The running of the 2017-18 season Western Australian AMCA Nationals Title was fought out at Manjimup Speedway last Saturday night, and it was Matt L’Huillier who emerged triumphant.

A small field contested the event around the massive 600-metre track and although down on numbers, the field had plenty of quality including: last season’s WA Title runner-up L’Huillier and two-time WA Champion David Boyes. With rain falling on the morning of the event, drivers were met with a tricky track that had plenty of drive in it all through the night.

As the field lined up for the start of the 20-lap WA Title decider, the Kalgoorlie duo of Boyes and L’Huillier shared the front row and it was clear right from the outset it would be these two that would fight it out at the pointy-end of the field.

Boyes got the initial jump with L’Huillier closely following in second, while Shaun Cubbage, who finished 10th in last season’s WA Title, slotted into third. As the race entered the second phase, a caution bunched the field up and that’s when L’Huillier made the move on the inside of long-time leader Boyes.

L’Huillier, who, by his own admission, had a nice car setup for the heavier track conditions, set out to try and gap the field with Boyes giving chase. As the field came around on lap 19, Boyes made heavy contact with the pole line and speared to the infield, which dropped him to the back of the field. 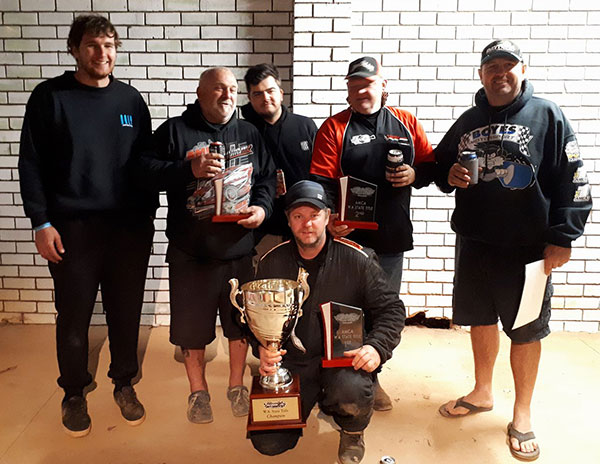 Behind L’Huillier at the fall of the chequered flag in second was Cubbage. The Boulder, WA-based racer, who is the defending WA Actions Series Champion, spent most of the race sitting in fourth but when Boyes went to the infield, he was elevated to third. On the final corner of the race, Cubbage passed Greg Horan for the final spot on the podium.

Horan bettered last season’s WA Title performance of ninth place and although he had to settle for third after being passed on the last corner, it was still a pleasing result. Boyes recovered from his infield excursion to record a fourth-place finish, while Ian Dunbar completed the finishers in fifth.

Earlier in the night, there were three heat races contested and the victories went to Cubbage, L’Huillier and Boyes.

One of the hard-luck stories of the night was Murray Parsons Jnr, who had his night brought to a premature end in the final round of heat races due to engine failure.