After a 12-month stint on the sidelines, AMCA Nationals racer Nathan Durston found himself back in the winner’s circle at Brisbane’s Archerfield Speedway last Saturday night, breaking through to claim his first feature-race win since returning to the track.

While he’s visited the podium on several occasions throughout the 2017-18 season in the minor positions, Durston hadn’t quite been able to reach the top step while attempting to dial in his 350 Chev powered Qld # 97 Palm Beach Motors / McKinnell Motorsports supported Kempy car; however, last Saturday night’s outing proved that his car is now well and truly capable of winning.

Sitting equal second highest in points with two other drivers heading into the 20-lap feature race after placing third and second in his heat races, it was Durston who was awarded the outside front-row starting position alongside pole-sitter Thomas Vickery, by virtue of recording the fastest lap time of the three.

Immediately getting the jump on Vickery at the drop of the green flag, the 27 year old powered into the early lead, managing to hold on to first place throughout a subsequent stoppage and restart, as well as navigating lapped traffic to claim a comfortable victory.

“It’s great to finally break through for our first feature-race win after collecting a number of minor podium results all season,” commented Durston, who spent the off season overhauling his car, re-panelling it and also fitting it with a 350 Chev engine and a quick change differential. 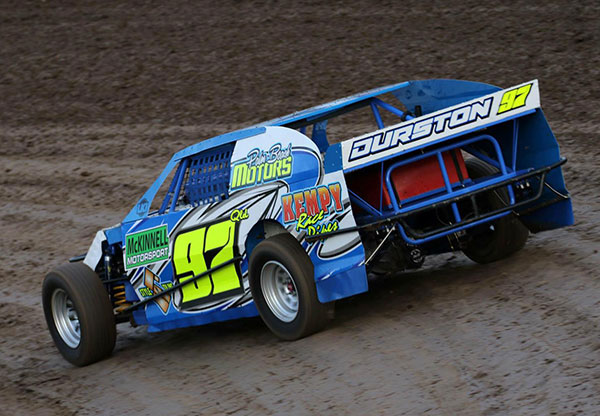 “We spent a lot of time on the car over the off season, so it’s really satisfying to see all of our It’s great to see all of our hard work pay off, as well as being able to repay my pit crew and all of my supporters with a positive result.”

Getting his speedway career underway at the age of 13 in the Sigma Juniors class, the Bilambil Heights, NSW resident was later offered a drive in AMCA Nationals by John Grinter and then ‘Richo’ for a number of seasons, before branching out on his own in 2013 and purchasing his Kempy chassis and 253 engine.

Taking a break from driver duties in 2016 to purchase his house, selling his car and engine package to Ian Miller on the Sunshine Coast of Queensland, Durston had the opportunity to re-purchase his car from Miller 12 months later, contesting a few shakedown runs in the latter stages of the 2016-17 season, before returning to the track full time this season.

Off the back of his pleasing victory, Durston will now carry some added confidence into the upcoming NSW Title, which is set to take place at Sydney’s Valvoline Raceway on April 14, followed by the Queensland Title at Archerfield Speedway on May 6, where he will be once again hoping to visit the top step of the podium. 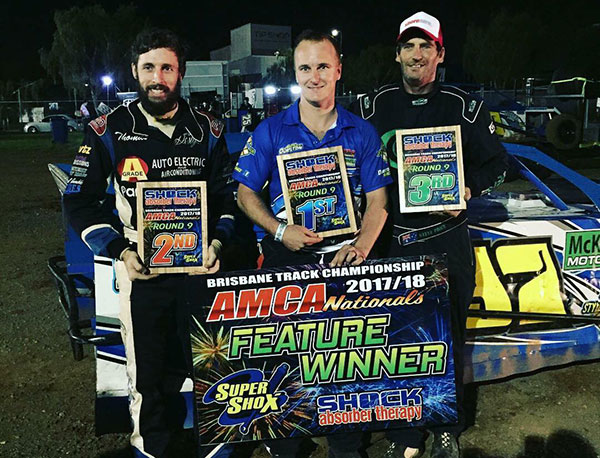 To find out more about Durston and his team, LIKE them on Facebook by searching Durston Racing.