In what was his maiden visit to one of Australia’s premier speedway tracks, the 47-year-old racer showed strong pace from the outset. His consistency throughout his heat races set him up with the best opportunity to challenge for the NSW Title honours, placing third, first and second, which was enough to earn him the pole position start for the feature race.

While it was Moore who lined up on the inside of the front row, it was defending NSW Champion Matt Hardy who managed to get the jump to take control of the early lead; however, Moore didn’t let that dampen his spirits.

Utilising his previous title experience to bide his time and drive a smart race, Moore progressively chased down Hardy before eventually managing to execute a passing move on his rival on lap 20 to make his way into first place. Once he was in clean air, Moore couldn’t be stopped, managing to create a gap from the rest of the field and once again driving to victory lane. 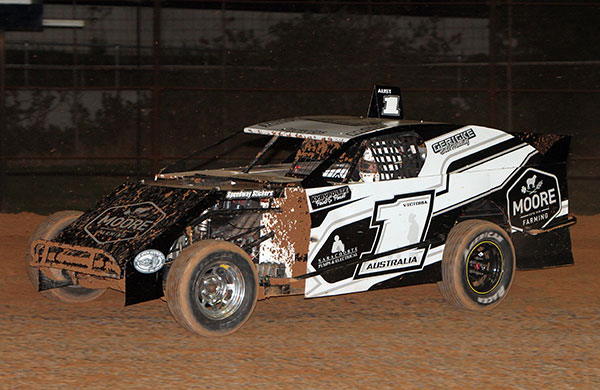 “To go to one of the country’s best tracks for the first time and come away with the NSW Title win is a fantastic feeling,” expressed the Kybybolite, South Australia-based racer, who campaigns the Aus # 1 Naracoorte Pumps & Electrical supported Panther car.

“I knew it was going to be a difficult race with so many tough competitors at a track I wasn’t familiar with, so it’s definitely an achievement and I’m proud of the entire team for making it happen. It’s certainly been a season to remember and we’re looking forward to seeing what we can do next season with all of this new experience under our belt.”

The next blue-ribbon event for Moore is going to be the Queensland Title at Brisbane’s Archerfield Speedway on the Saturday night of May 6.