Durston, from NSW-Queensland border town of Bilambil Heights, started the feature race from the outside of the second row after three strong heat-race performances. He immediately moved into second behind early pace-setter and front-row starter Lee McKinnell, after highest qualifier and pole sitter Russ Hardy had retired on the opening lap of the 30-lap distance, due to a mechanical problem.

The McKinnell and Durston duo then set about battling for the lead of the race and as they hit lapped traffic Durston took the opportunity to make a pass for the lead on lap 13 around the outside of McKinnell. From that point, Durston then opened a gap over McKinnell and went on to greet the chequered flag a convincing winner.

Making a recent return to the AMCA Nationals class, McKinnell, the son of four-time Australian Champion Shane, was impressive throughout the event. Despite losing the lead Durston, McKinnell still managed to bring it home in the runner-up spot for the second occasion in his career.

Coming home in third on the podium was one of the Queensland’s leading drivers in Steve Potts. After initially qualifying from position five, Potts quickly made his way into third and that’s where he remained for the rest of the race. Despite closing in on McKinnell, he couldn’t get past and had to settle for final spot on the podium.

Tasmanian visitor Daniel Brooks finished just off the podium in fourth place. Recording his best finish from the title events on the mainland, the current and four-time Tasmanian Champion was in contention throughout the race and ended up as the highest placed interstate competitor. 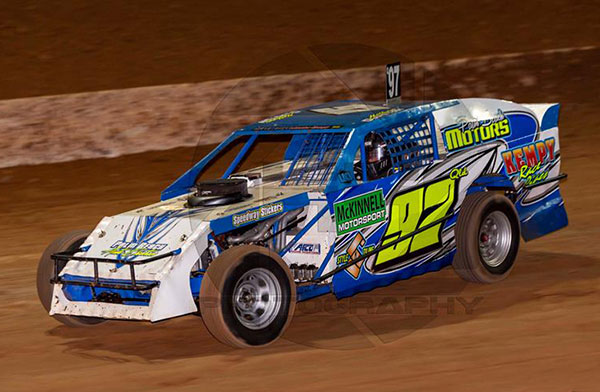 Rounding out the top-five finishers was Tim Gamble. After working his way into the top-five contention in the early stages of the race, the Lismore, NSW based racer was looking strong until he was shuffled back to seventh, before making up ground and finishing in fifth.

It was a tough night for defending Queensland Champion Matt Hardy (Qld), who had dropped his opening heat race, due to a mechanical issue, and from there he was forced to play catch up. After starting the feature race from position 15, he charged his way forward to finish in sixth.

The remaining finishers were Mark Chiplin (NSW), Stephen Ward (Qld), Mark Brownsey (Qld) and Michael Mason (Qld). The latter had impressively qualified third for the feature race, but a lap-16 spin, while positioned in eighth spot, saw him finish at the tail of the field.

The nine heat races leading up to the feature race were shared between Lee McKinnell (x 2), Raymond Kime (NSW), Blanch, Durston, Potts, Markulin, Gamble and Russ Hardy. During the heat-race action misfortune saw Shane McKinnell and last season’s Queensland Title runner-up finisher Steve Price suffer premature ends to their nights. After winning a heat race and qualifying for the feature race out of position 10, Kime suffered clutch failure and was unable to take his place in the field.

The Queensland Title wrapped up the major AMCA National events for the 2017-18 season.