A force to be reckoned with throughout the entirety of the event, ex-NT resident and recently-crowned Darwin Champion Gutierrez, from Muswellbrook in the Upper Hunter region of NSW, proved too strong, clean sweeping each of the three heat races and qualifying on pole position for the 25-lap NT Title-deciding feature race.

Making the most of his start, Gutierrez powered into the early lead, and while he was forced to endure mounting pressure from recent Junior Sedan graduate and fellow front-row starter Carew, whose hopes were later dashed by a mechanical issue which forced him to retire, he managed to hold on to his lead to score a flag-to-flag victory.

In what he announced would be his final race meeting in the driver’s seat, Peter Harding closed his speedway career in pleasing fashion, coming home in the runner-up spot ahead of impressive rookie Reece Prior, who was thrilled to improve on his sixth-place starting position to complete the podium in third, achieving his maiden major podium result aboard the ex-Dale Roberts car.

Rounding out the final finishers were Maria Panasewycz and Janet Belcher in fourth and fifth place respectively. 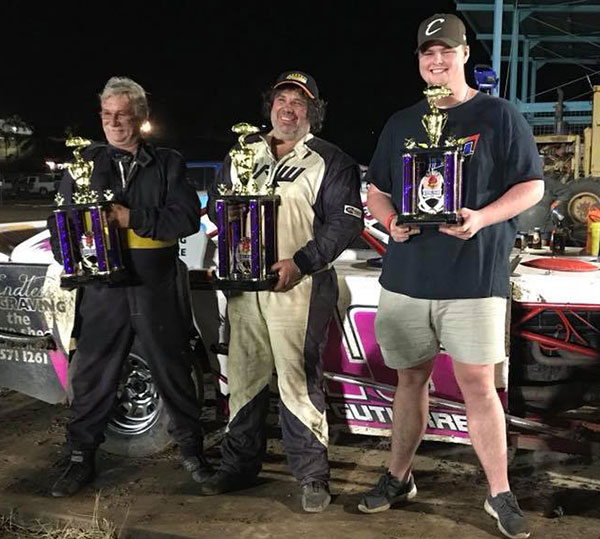 The hard-luck award for the night without a doubt went to Carew, who looked in good stead to be able to challenge Gutierrez for the win prior to his disappointing DNF. Having only contested two race meetings prior to the NT Title, the 17-year-old racer exceeded expectations throughout the NT Title, coming away with a trio of second-place finishes in the heat races.

Sharing the disappoint and joining Carew on the infield was Brendan Kenna, who lined up on the inside of the second row for the feature race, only to retreat to the infield with a flat tyre.