Off the back of what was a pleasing performance in the Australian Title, NSW visitor Tony Blanch was able to build on his front-running form during the recent Queensland AMCA Nationals Title at Brisbane’s Archerfield Speedway, ultimately coming away with the victory.

Rounding out the Australian Title podium in third just four nights prior to the Queensland Title event, Blanch, from Grafton in northern NSW, was riding a wave of confidence heading into last Wednesday night’s competition, and after what was a consistent run throughout qualifying, he was rewarded with the first major win of his career.

While he managed to lead the feature race from start to finish after immediately securing first place from his outside front row starting position, Blanch certainly didn’t have it all his own way, with the likes of newly-crowned Australian Champion Matt Hardy hot on his heels throughout the 30-lap distance.

After losing out to Blanch at the drop of the green flag, pole-sitter Hardy couldn’t quite get close enough to the leader to execute a passing move and as such he was forced to settle for second place, with Lee McKinnell completing the podium in third after a hard-charging drive from position eight. 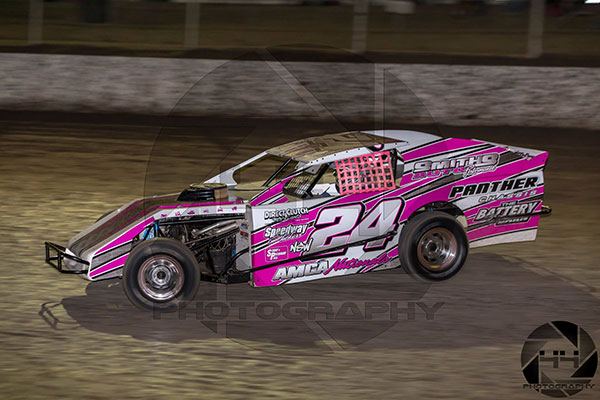 After qualifying in third place, the earliest retirement came just three laps into the feature race when regular front-runner Steve Potts’s Queensland Title hopes were dashed. He was later joined on the infield by current and four-time Tasmanian Champion Daniel Brooks (Tas), who was running inside the top 5 when disaster struck and he failed to finish five laps from the finish, along with Peter Markulin (NSW) and Lewis Gamble (NSW).

It was Bassett who came out on top in the B main, ahead of fellow feature-race transferees Michael Mason, Markulin and Cartwright.

AMCA Nationals would like to thank each of the competitors who made the trip to Queensland to compete in the Australian and Queensland Titles, along with all of the home-state drivers who participated.

Now taking a short break after what was a busy past week for title events, the next major event for AMCA Nationals is set to take place on the Saturday night of February 9 with this season’s running of the South Australian Title at Murray Bridge Speedway.