Surviving what can only be described as a turbulent feature race, it was former Victorian Champion Darren ‘Plugger’ McCarthy who came out on top in last Saturday night’s South Australian AMCA Nationals Title at Murray Bridge Speedway.

With more cars finishing on the infield than greeting the chequered flag, just managing to make it to the end of the 30-lap South Australian Title-deciding feature race proved to be a challenge in itself; however, it was a challenge that McCarthy, from Mildura in Victoria, was more than capable of handling.

Set to line up on the front row alongside pole-sitter Jake Armstrong following what was a consistent performance throughout qualifying, McCarthy inherited the pole position start when Armstrong (SA) elected to start the feature race from the outside; a decision that proved costly for Armstrong, who was unable to fend off McCarthy at the drop of the green flag. 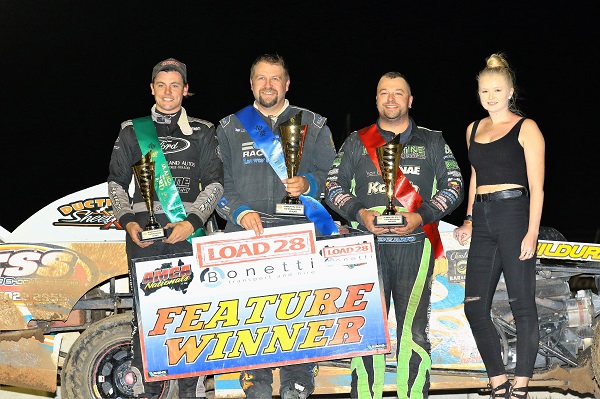 Immediately taking control of the lead and battling with Armstrong until the latter’s car caught fire on lap nine, bringing his night to a premature end and resulting in a subsequent restart, McCarthy once again managed to get the jump on his rivals and was unable to be reeled in throughout the distance, claiming what was a well-deserved and popular victory.

It was outgoing South Australian Champion Dean Heseltine (Vic) who was next to cross the finish line to claim the runner-up spot, after executing a late-race pass on former Australian Champion Tim Reidy (Vic), who had been running second for the majority of the second half of the feature race but was eventually forced to settle for third.

Another former Australian Champion in Jeremy Moore (SA) came home just outside of the top three in fourth place, followed by Frank Thierry (Vic), who did extremely well to finish fifth after starting from position 13. A trio of South Australians in Alan Saint, Kelsey Allen and Travis Litterini were the final feature-race finishers. 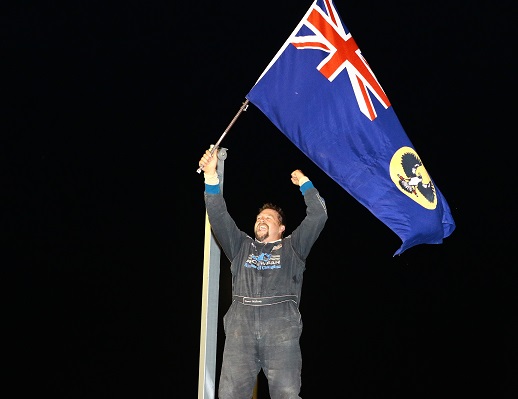 There were no repeat winners in the earlier heat races, with heat-race wins being shared between McCarthy, Gwynne, Moore, Cartwright, Reidy and Armstrong.

With just three title events remaining on the 2018-19 season calendar, the next major event for AMCA Nationals will take place on the Saturday night of February 23 with this season’s Tasmanian Title at Carrick Speedway.