Defending champion Daniel Brooks was without a doubt the favourite heading into last Saturday night’s Tasmanian AMCA Nationals Title at Carrick Speedway as he attempted to clinch his fifth consecutive crown, but it was Andrew ‘Dooie’ Ryder who managed to put a stop to his dominance, scoring what was a popular victory amongst his rivals.

Having placed second in the 2017 running of the event to Brooks, also at Carrick Speedway, Ryder had unfinished business when it came to the Tasmanian Title, but it seems that the time was right last Saturday night for him to clinch his maiden state title, after a late-race charge saw him take the feature-race lead. 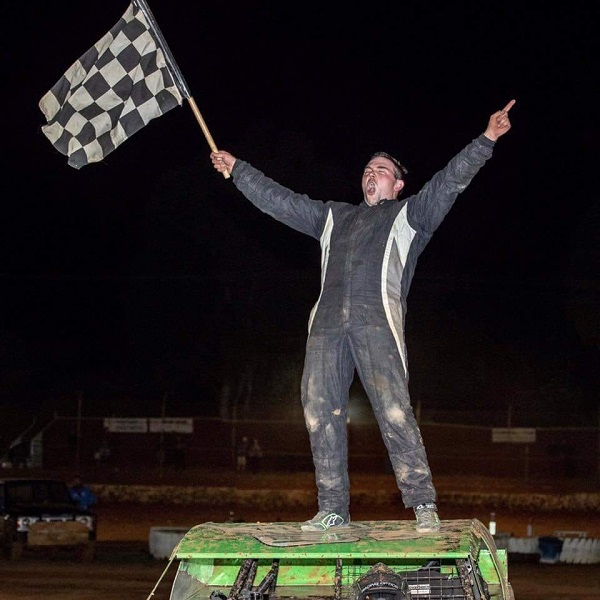 Lining up on the outside of the front row for the Tasmanian Title-deciding feature race alongside pole-sitter Ellis Dickenson, it was current Victorian Champion Tim Reidy who took control of the lead at the drop of the green flag, but it wasn’t long before Adrian Bassett stole first place away from him just five laps into the 30-lap distance.

From there, it looks as though Bassett would be in prime position to take the win, having led the majority of the race; however, proving that he wasn’t about to give up the title too easily, Reidy fought back with only a few laps remaining, executing a pass on Bassett for the lead, only to be pipped by Ryder, who was taking advantage of the battle.

With just three laps remaining, Ryder could not quite be caught, going on to claim what was no doubt a new career highlight. While Reidy came close to creating history as the only driver in AMCA Nationals history to win every state and national title in their career, he was forced to settle for second place by the narrow margin of just 0.557 of a second.

After qualifying in position four for the feature race, Bassett early race charge into the lead was an impressive one, but one that could ultimately not withstand the pressure of Ryder and Reidy, with the fast-paced driver rounding out the podium in third place.

Completing the top-five finishers were Jake Briggs and outgoing Tasmanian Champion Brooks, who was disappointed not to have continued his title reign, while pole-sitter Dickenson slipped back to sixth place, followed by Craig Bagorski, Rohan Blair, Frank Thierry (Vic), Anthony Wagg, Jacob Williams and David Birch, who was the final finisher.

Rodney Bassett was the first of the feature race’s casualties, retiring to the infield just three laps in, and he was later joined by Garth Stevens and Dennis Davidson.

In the earlier heat races, Adrian Bassett was the only driver to double up, scoring a pair of wins, with remaining heat-race wins being shared between Blair, Briggs, Reidy and Brooks.

This Saturday night will see the running of the Western Australian Title at Narrogin Speedway, while the final title event for the 2018-19 season will be the New South Wales Title, which will take place on May 4 at Gilgandra Speedway.