Dominant is the only way to describe Sean Mazzuchelli’s victory in last Saturday night’s Western Australian AMCA Nationals Title at Narrogin Speedway, with the racer crossing the finish line over five seconds clear of his nearest rival.

A model of consistency throughout his heat races, Mazzuchelli may have won the feature race, but it was two-time WA Champion David Boyes who started from pole position in the all-important Western Australian Title-deciding feature race after winning the coin toss.

Opting to run the low line, which turned out to be a disastrous decision, Boyes struggled on the tricky track conditions, making contact with another car at the drop of the green flag, which resulted in substantial damage to his steering, ultimately sending him backwards and leaving the lead wide open for Mazzuchelli to inherit on the opening lap.

From there, Mazzuchelli could not be pipped throughout the 30-lap distance, going flag to flag to claim what was a convincing victory. Mazzuchelli was also the only driver to break into the 18 second bracket during the feature race, recording a fastest lap of 18.859 seconds.

While Boyes was able to maintain second place for the first nine laps aboard his ailing car, he couldn’t quite hold on as third-placed Murray Parsons Jnr began to mount the pressure on him, eventually stealing the runner-up spot from him with two thirds of the race to go.

After sitting in sixth place for the majority of the distance, a hard-charging Greg Horan managed to power his way through the field to take over third place with just four laps remaining, rounding out the podium finishers. 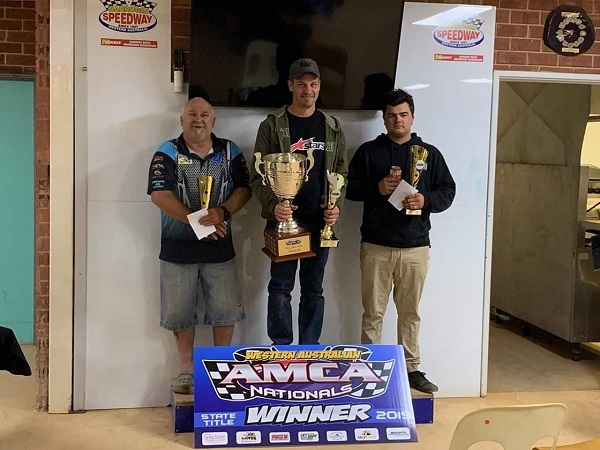 Next to cross the finish line was Brett Morrison, who briefly tasted third place in the closing stages of the race before being denied by Horan and forced to settle for fourth. He was followed home by a determined Boyes, Ajay Hammer and Rob Trenaman.

It was an extremely disappointing result for Boyes, who had picked up a heat-race win earlier in the night and looked likely to clinch the third WA Title of his career after starting from pole. Other heat-race wins fittingly went the way of the first and second-placed drivers Mazzuchelli and Parsons Jnr.

The final AMCA Nationals title event for the 2018-19 season will take place on May 4 at Gilgandra Speedway with the running of the New South Wales Title.