In what was a great credit to the AMCA Nationals class and the talent within, the recent Australian Speedway Awards at the Adelaide Convention Centre in South Australia saw current Australian Champion Matt Hardy recognised as the 2019 Modified Competitor of the Year. 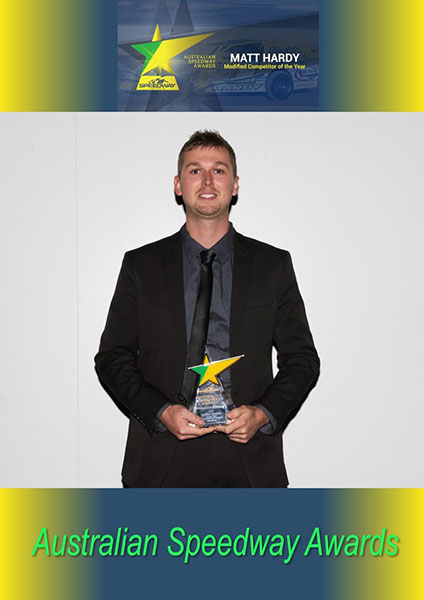 Not only was Hardy up against a stout list of talented drivers within his own class, the Modified Competitor of the Year award is also open to V8 Dirt Modified, Modlite and Legend Car drivers, making the fact that he was both nominated and victorious a remarkable honour.

Having initially claimed the Australian Title crown back in 2016 on his home track Lismore Speedway, the professional and approachable driver repeated history during this season’s running of the event, this time delivering a stellar performance at Toowoomba’s Hi-Tec Oils Speedway to make his way forward from position 11 into the lead.

His consistency, sportsmanship and humble attitude well and truly makes Hardy a deserving recipient of the prestigious award.

“Winning two Australian Titles is a pretty incredible feeling, but being recognised in front of the whole speedway community and representing the AMCA Nationals class is my greatest achievement yet as a driver,” expressed the 2016 and 2017 Queensland Champion.

“The comradery and competition in the AMCA Nationals class is great and I love being a part it. I can’t thank the class, Speedway Australia, my team, sponsors and family enough for making this award possible for me.”