After a decade of trying, Tim Reidy finally broke through last weekend, delivering a faultless performance to win the 2017 Australian AMCA Nationals Championship at Kalgoorlie International Speedway in Western Australia.

Having finished runner-up in the past two Australian Championship events at Lismore Speedway (NSW) and Murray Bridge Speedway (SA), the Victorian-based racer was a dominant force from the outset, qualifying pole for the feature race, by virtue of winning each of his three heat races on the opening night of competition and finishing fourth in his remaining heat race on Sunday night.

Immediately taking the lead off the starting line, Reidy could not be stopped, leading each lap of the 40-lap distance to finally get the monkey off his back and claim his maiden Australian Championship victory.

Next across the finish line was current Victorian Champion Jamie Collins (Vic), who also gave a strong performance to claim the runner-up spot for the second occasion in his career, ahead of current Western Australian Champion David Boyes (WA), who was the best of the locals in third.

Finishing just off the podium in fourth was outgoing Australian Champion Matt Hardy (Qld), with the current Queensland and NSW Champion managing to overthrow current and three-time Tasmanian Champion Daniel Brooks (Tas) in the closing stages of the feature race, with Brooks completing the top-five finishers. 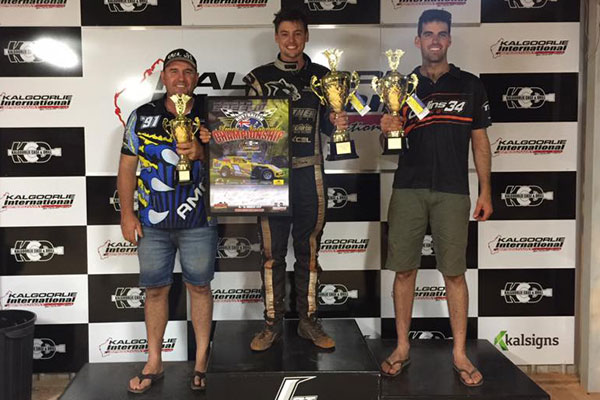 It was Reidy who dominated the opening night of competition, with a win in each of his three heat races, placing him on top of the points heading into night two, while Collins doubled up with two victories and Moore, Horan, Matt Hardy and Brooks came away with a win apiece.

The remaining heat races on night two saw Barnwell, Collins and Boyes come away with top honours, while Brad Wright drove to victory in the B main, ahead of Brett Morrison, Jacob Belcher and Damien Birch, with all four drivers securing their transfer spots into the feature race.

With the Western Australian AMCA Nationals Title being held at Esperance Speedway this Friday night, Reidy will be hoping to continue his winning form, while his rivals will no doubt be looking to hinder his chances.