With the first half of his 2017-18 season campaign being hindered by recent mechanical woes, Spano Gutierrez last Saturday night at Sydney’s Valvoline Raceway managed to turn his fortunes around by claiming his first AMCA Nationals feature-race win of the season.

While he’s consistently been running within the top three in feature races at previous shows this season, leading the feature race in his opening meeting at Valvoline Raceway before retiring with mechanical issues and running second at Gilgandra Speedway before blowing his left-rear tyre, Gutierrez hadn’t yet been able to greet the chequered flag in first place this season, until Saturday night that is.

Qualifying on pole position for the feature race after scoring a pair of runner-up finishes in his two heat races, the Muswellbrook, NSW-based racer, who is originally from Darwin in the Northern Territory, was in prime position to take control of the lead at the drop of the green flag aboard his NT # 46 The Blue Shed / Endless Engraving supported Panther car, which is powered by a 253 engine.

Finding some moisture on the bottom of the track in the early stages of the 20-lap event, the key for Gutierrez was to hold the bottom line; however, it wasn’t all smooth sailing against the competitive field, having endured pressure from Wayne Simpson in the opening quarter. In the middle stage of the race, Terry Pankhurst launched an attack on Gutierrez as he attempted to steal the lead, which he briefly managed to do, but Gutierrez was quick to retaliate in the following laps to take back his position out in front, going on to claim his maiden win for the season. 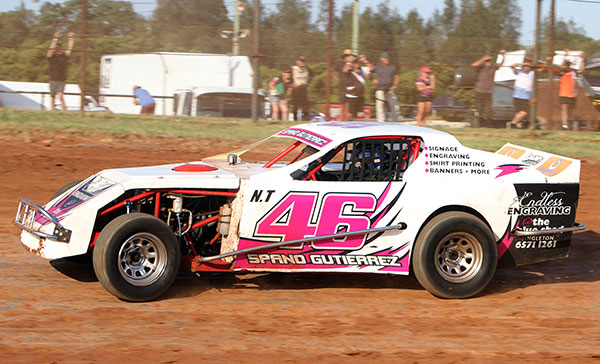 “We’ve been consistently fast so far this season but in the last couple of race meetings we’ve had some misfortune, and to be able to put it all together on Saturday night and clinch the win is satisfying,” expressed Gutierrez, who admits that the tough NSW competition has helped his development as a driver.

“The track was quite slick, which really worked in my favour as it gives the 253 engines a chance to keep up with the more powerful Chevs. The car was great all night, so I have to say a big thanks to my crew man Col Goodhew for all of his hard work on it.”

Making the move from Darwin to Muswellbrook in the Hunter Valley of NSW five years ago, Gutierrez brought with him the ex-Mark Lincoln 2011 Australian Title winning Panther car he had purchased a year earlier, but spent a season on the sidelines prior to getting back into racing, while settling into a new job.

Having raced numerous classes over the years back in the Northern Territory, Gutierrez’s career highlights include winning multiple feature races in NSW, which is highlighted by taking out the Gary Bourke Memorial two seasons ago at Valvoline Raceway. 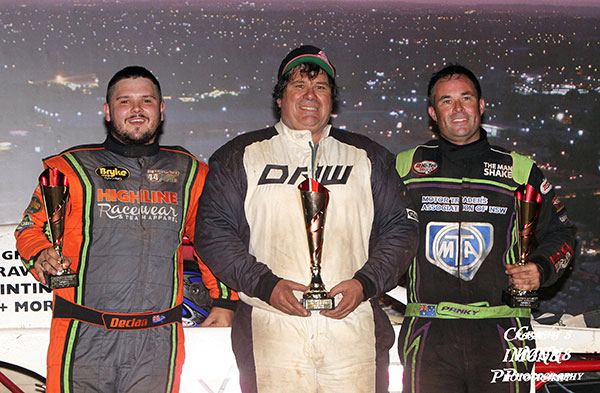 For the rest of this season, Gutierrez will continue to race throughout NSW and plans to participate in the Australian Title at Ballarat’s Redline Raceway (Vic) in January, along with the Victorian Title. He will also return home to the Northern Territory in 2018 to contest the state title.

For his next appearance, Gutierrez will return to Valvoline Raceway on Boxing Night (December 26) where he will hope to continue his winning form.

Gutierrez would like to thank the following 2017-18 season sponsors: The Blue Shed and Endless Engraving. Special thanks go to his fiancée Lisa Williams, Col Goodhew, and Vicki Taylor and Todd Keaton from The Blue Shed.