After getting his 2017-18 season off to the best possible start back in October, Dean Heseltine recently at Moama’s Heartland Raceway returned to victory lane after taking out the third AMCA Nationals Action Series round.

Despite not quite achieving the same results as last season, which saw him collect six feature-race wins, Heseltine has enjoyed a positive 2017-18 season so far in his six appearances, having shown solid pace aboard his Vic # 93 Hair By Denae-backed Panther car which he believes has led to improved driving.

Being unable to catch an elusive feature-race win since coming out on top in the season opener, which incorporated the first Country Cup Series round, at Rushworth Speedway, the Lancefield, Victoria-based driver’s determination was at an all-time high heading into his most recent event.

Displaying consistency throughout his heat races to place third, fourth and first, Heseltine went unchallenged throughout the feature race, immediately taking control of the lead from his pole starting position and going flag to flag to claim a convincing win. 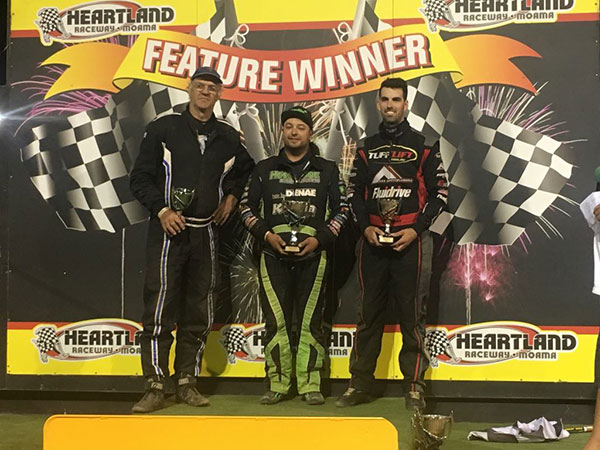 “It’s honestly a bit of a relief to come away with this win because we’ve been knocking on the door since the beginning of the season but just haven’t quite been able to put it all together,” admitted Heseltine, who spent the off season meticulously going over each detail of his car to ensure maximum performance.

“The car has been very strong throughout the season and we’ve definitely had feature-race winning at every race meeting, but we’ve just had a little bit of bad luck that has denied us of even better results, but we are looking forward to the rest of the season and finishing it on a solid note.”

Finishing runner-up in an earlier feature race at Ballarat’s Redline Raceway prior to the Australian Title, the 33-year-old racer knew that his team had what it took to be a front-running contender. In what was a mixed run during the heat races, which included a DNF due to a flat tyre after contact with a rival in one heat race along with being put back two spots to third after winning in another heat race, Heseltine still managed to start the Australian Title deciding feature race out of position 8.

With passing being difficult on what had become a one-lane track during 40-lap feature race, Heseltine was running inside the top 10 but with 10 laps remaining but was sent ROF after contact with another rival. From the restart, he was able to fight his way back to finish in 10th.

Heading to Swan Hill’s Sonic Speedway one week later for the Victorian Title, Heseltine started the night strong with a win in his opening heat races, but unfortunately couldn’t quite keep up his momentum in remaining heat races, causing him to start further back in the feature-race field than he had hoped. With passing once again becoming an issue, Heseltine was able to salvage another top-10 result, coming home in eighth place. 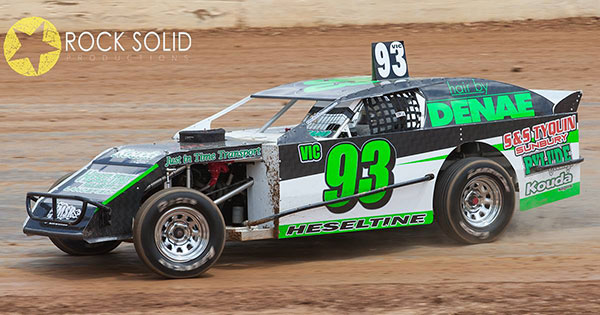 With added confidence off the back of his recent win, Heseltine is looking forward to contesting the upcoming South Australian Title at Mildura’s Timmis Speedway over Easter, which will also be run in conjunction with the two-night All Stars Series on March 30 and April 1. Later in the season, he hopes to travel to Sydney’s Valvoline Raceway to participate in his fourth title event of the season with the NSW Title on April 14.