In a field that was full of quality, Heseltine qualified for the 30-lap South Australian Title-decider on pole position. Sharing the front row with Heseltine was defending SA Champion Jamie Collins (Vic). On the second row was Lachie Gwynne (SA) and Russ Hardy (Qld), while Jake Armstrong (SA) and Ryder occupied the third row.

At the drop of the green flag, Heseltine immediately jumped into the lead and that is where he remained for the entire race distance. Despite multiple stoppages, Heseltine remained steadfast at the front and crossed the line to record his first state title victory.

Second placed Matt Hardy was one of the movers of the race. After qualifying for the feature race from position seven, he made his moves early, jumping into third place within the opening five laps. Holding down third for most of the race, he promoted himself to second with just a handful of laps remaining. The closing laps saw the former Australian Champion chase Heseltine all the way to the chequered flag.

Placing third was Ryder. It was a very impressive run by the Tasmanian front runner after he dropped back to seventh at the beginning of the race and remained there for over half of the race distance. It wasn’t until the final 10 laps that Ryder began his march forward. On the final corner, he snared third place on the podium. 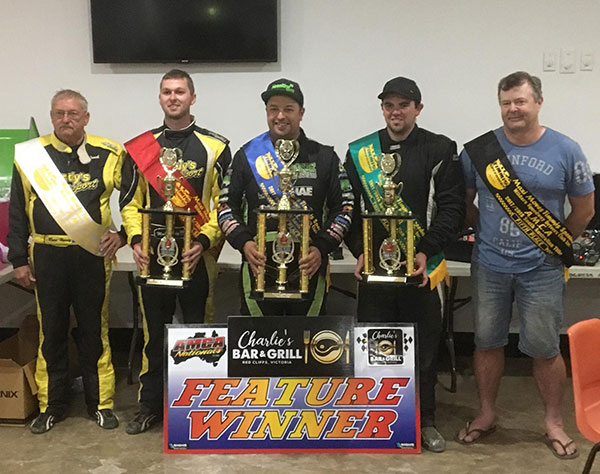 Coming home in fourth was Russ Hardy. After falling back to fifth in the early stages and then dropping as far back as seventh with just 10 laps remaining, Hardy, who is the father of Matt, was on a charge and managing to pass a few rivals to come home in fourth.

Rounding out the top-five finishers was current Australian and Victorian Champion Jeremy Moore (SA). It was a strong showing by Moore, dropping to deep in the pack before charging his way forward.

Both David Wick (Vic) and Tegan Martin (SA) were non-starters in the feature race.

There was controversy at the completion of the event, when defending SA Champion Jamie Collins, who initially crossed the line in fourth, was excluded from the results, due to a technical breach.

Tindal was victorious in the B main from Horan and Wick.

The next major AMCA Nationals event will be the NSW Title at Sydney’s Valvoline Raceway on the Saturday night of April 14. A big field of over cars has already nominated for the event.