Qualifying on pole position for the Queensland Title deciding feature race, Hardy was never bested and led the 30-lap distance from start to finish. The Queensland-based racer took the chequered flag in a commanding win, ahead of former Australian Champion and veteran Jim Knight (NSW) and recently-crowned NSW Champion Daniel Brooks (Tas) in second and third place respectively. For Hardy, he became the first Queensland-based winner of the event in seven seasons.

Brooks gave an impressive performance to take the last podium place, after starting from seventh, while third-place qualifier Steve Potts remained hot on the heels of Hardy, until he was forced to retire from the race on lap 13 due to fuel pressure woes, giving the leader plenty of breathing room. 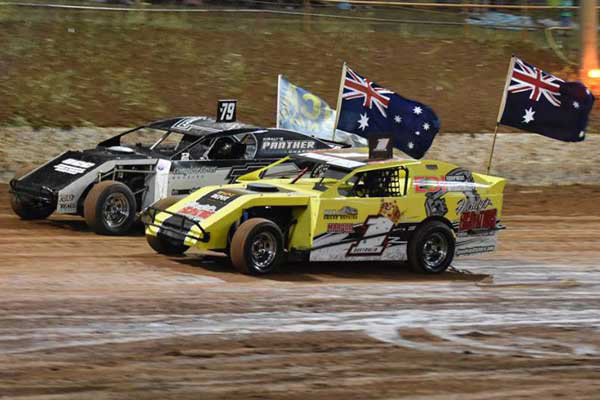 Defending and four-time Queensland Champion Tim Reidy (Vic) started rear of field for the feature race, after managing to snare the final transfer spot behind winner Jason Dreaver, Lewis Gamble and Vickery in the B main.

Unfortunately for Reidy, any hopes of defending his Title were dashed, when he pulled into the infield on lap 18 with fuel pressure issues.

Off the back of his recent Australian Title win, Hardy continued his winning form, picking up two heat-race wins earlier in the night. The remaining heat-race wins went the way of Newstead, Luke Frenken, Molle, Reidy, Potts, Vickery and Price.

The Queensland Title concludes Title month for the AMCA Nationals and is the last major event for the 2015-16 season.